Northern Stage’s new associate theatre company, NORTH, are branching out and gearing up for an exciting programme of events this summer.
In November 2012 Northern Stage recruited seven recent graduates, emerging artists and actors to form a fresh new company. Led by Northern Stage’s Creative Associate, Mark Calvert, NORTH was a three month opportunity to create work, develop skills and meet some of the regions most important creative minds. 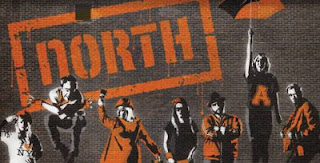 This resulted in a brand new piece: “The Man Who Thought the Moon Would Fall Out of the Sky”. Inspired by a 19 th Century Scrapbook the show “Unearthed the curious tale of a mans life… A riotous evening filled with laughter, live music, and a magical story that may or may not be true.”
Following the success of their debut performance at the end of March the seven young theatre makers have formed their own independent theatre company, and are taking the show on the road.
Their “Summer Festival Tour” includes performances in the Theatre Arena at the renowned Latitude Festival, a show at Northern Stages beautiful Edinburgh Fringe venue, St Stephens, before finishing off on the Isle of Wight in the Bestival Amphitheatre.

Company member Alex Tahnée, 23, shares her thoughts on the summer ahead: “Taking our theatre to huge audiences in different parts of the country allows us to advertise the North East as a creative and exciting hub of talent, which is exactly what it is.” Alice Blundell, 25, adds: “Starting with the festival tour is incredibly exciting for us; to have the recognition regionally having been supported by a fantastic organisation like Northern Stage means we’re the first young company to make that journey to the festivals. It is so special for us.”

Since they finished their ten week residency, NORTH have also been keen to continue their work and make the most of the opportunity they have been given. This has included musical gigs, curating events and “NORTH Night”: a pilot networking event designed to engage young, emerging artists in the region. Company member Stan Hodgson, 21, says: “We didn’t want a ‘suit and business cards’ type of networking, but an informal sharing of work and ideas - with a drink in hand! We were pleased with the outcome and hope to turn it into a regular event very shortly.”
But with this National attention comes an urgent need for fundraising and organisation, and the group know that the hard work is only just beginning: “All of us in NORTH are prepared to roll up our selves and muck in” Maria Crocker, 25, explains: “We need to take it one step at a time and continue to stand by what we believe in - we are determined to make it happen.”

The performance at St Stephens, Edinburgh Fringe, which will be followed by a “right old knees up” gig and party, will also see the announcement of the company’s new name and branding, signalling a new chapter for the group and a bold step towards life after Northern Stage.
Maria adds: “Being a part of St Stephen's and being programmed alongside the best of Northern theatre productions is a real honour and something we are all extremely proud and excited about.”
Michael Blair, 31, adds: “We want to build upon the start we have been gifted by Northern Stage and establish the company as a major player in the region and producer of great work, as well as an organisation to whom other companies go for advice, support and collaboration.”
For more information on the company’s adventures this summer, you can read their blog on NorthNS@blogspot.com. You can also follow them on twitter @North_NS.