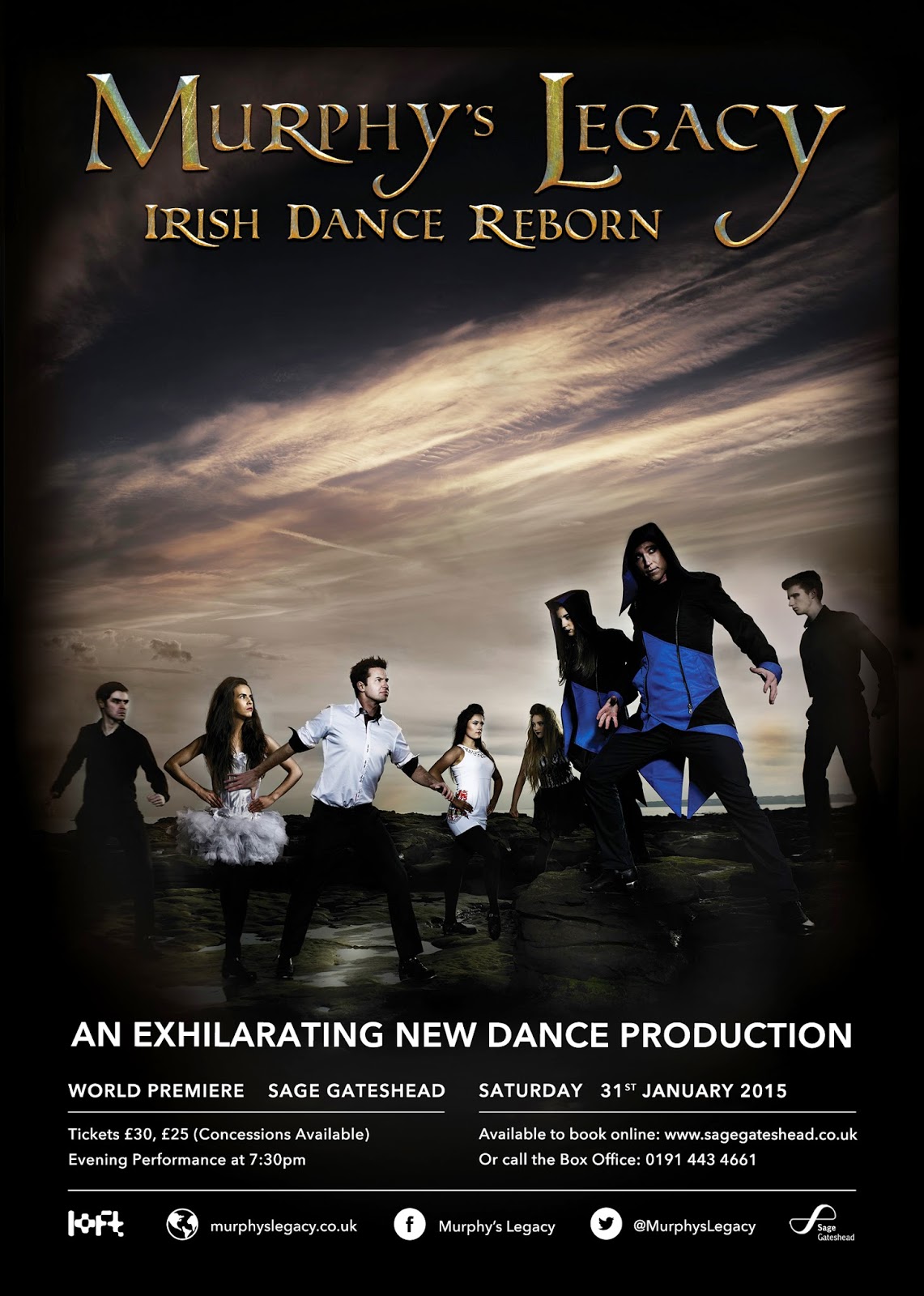 Murphy’s Legacy, an exhilarating new Irish Dance show from former  ‘Lord of the Dance’ and ‘Riverdance’ stars is set to launch its world premiere at Sage Gateshead on 31st January 2015.

Right now we are offering an amazing £5 off - just call Sage Gateshead Box Office on 0191 443 4661 and quote ‘MurphysLegacyOffer’.
The Legacy

The Emerald Isle was once a welcoming place, full of fun, peace and tranquillity. However, it was torn apart after years of clan fighting which had left Ireland in complete turmoil. The Murphys, residents of the once beautiful land were in search of a new home, to escape all of the hurt and bad memories. Little did they know their new home, Ishan, was not a welcoming place.

Murphy’s Legacy is a dark yet inspiring tale of courageousness and loss. How far would you go, to save the ones you love? What would you sacrifice, in order to finally achieve peace? These are tough questions that nobody ever wants to face, but when examined, make for extraordinary viewing.

Despite its origins, Murphy’s Legacy spiritually lies in the North East of England. Show creator Chris Hannon, a former male lead in ‘Lord of The Dance’ and co-owner of the internationally recognised North East based ‘Hannon Murphy School of Irish Dancing’, joins forces with worldwide dance sensations US based Zach Klingenberg, fellow former female lead Katrina Hesketh and dance champion Kaila-Lee McManus to bring you what is sure to be a new Irish Dance global phenomenon.

Don’t blink, for this is no ordinary Irish Dance performance, it is a battle of styles, a clash of colours. Murphy’s strong cast give an invigorating performance of traditional Irish Dance, with dark cinematic undertones, creating a show like no other.

This is Irish Dance reborn.

The Story Behind The Story

Behind every great stage production there is an equally enticing story of inspiration and imagination. The Murphy’s Legacy project is one which has been building and developing for Chris Hannon the show creator throughout his whole life…

After spending 13 years in the world renowned ‘Lord of the Dance’ show, Chris always had the desire to find the very best dancers and choreograph a show himself. His biggest inspiration, and the name behind Murphy’s Legacy, comes from Chris’s grandmother Patricia Livingstone, who not only taught Chris to dance as a young boy, but also put Irish Dancing firmly on the map in the North East of England. Music and dance were a huge part of Patricia’s life and her talent was passed down to her daughter Kathleen, and together they have built up one of the most successful dance schools in the region – the ‘Hannon Murphy School of Irish Dancing’. Immersed in this dance background, and lucky enough to work with such a wonderful mix of teachers and fellow dancers, Chris’s dream of producing and choreographing a new Irish Dance show flourished.

After producing four pilot shows throughout 2013, Chris knew that the time was finally right – and now with the best team of people behind him – Murphy’s Legacy could truly become a huge hit. After a chance meeting late last year with John Elliott, an international artist and musical composer and an introduction to music business expert Andrew Archer, both co-owners at Loft Music, the project came together with full momentum. With new musical compositions from Loft, world-class dance choreography from a hybrid of US and UK origins, the heart and desire from Chris, not to mention the fantastic cast of internationally prestigious dancers and musicians, Murphy’s Legacy is set to blow the roof off its world premiere venue Sage Gateshead on the 31st January 2015 and succeed in many venues around the world for years to come. 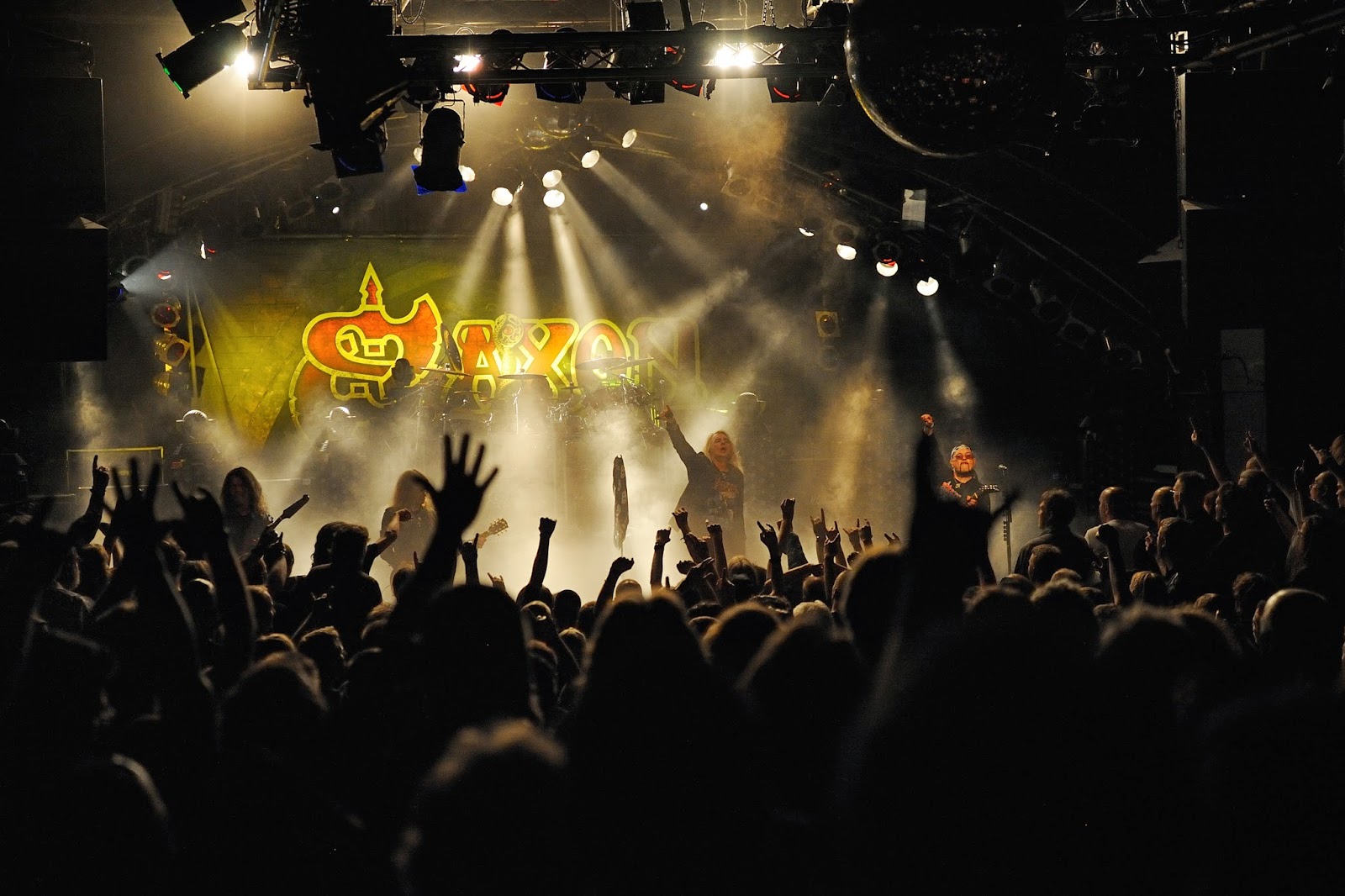 NWOBHM legends Saxon have announced the re-scheduled dates for their recently postponed UK shows. The tail end of the UK tour, originally planned for December 2014, had to be delayed due to Nigel Glocker’s sudden health problems.

The drummer, who was taken to hospital with a brain aneurysm, is now back home and on the mend after two surgical procedures; he won’t however be able to perform in the remaining dates and will be replaced by Sven Dirkschneider, the son of Udo Dirkschneider (Accept), who will be joining on stage frontman Biff Byford, Paul Quinn (guitar), Doug Scarratt (guitar) and Nibbs Carter (bass).

Biff says: “It’s great to see Nige on the mend, he will get the chance to see the band from out front for a change.”

Nigel has recently posted a video message on the band’s Facebook page to thank fans and loved ones and update them on his current health status. The remaining members of Saxon are extremely pleased with his fast recovery and are looking forward to finishing what they started, performing the last five shows of their landmark 35th anniversary tour.

The new dates are as follows:

Ticket price for London is £27.50 (subject to booking fee) - all other shows £26 (subject to booking fee); PAY AT BOX OFFICE IN PERSON USING CASH AND AVOID BOOKING FEES! please refer to www.Saxon747.com or www.Kililive.com (24 hour ticket line - 0844 871 8803) for more info. December’s tickets will be valid for the rescheduled shows and new tickets are now available.

The UK dates are to be the culmination of 38-date European tour “Warriors of the Road” celebrating their 35th Anniversary. The set list will take tracks from what is known to the fans as 'The Holy Trinity' - Saxon's seminal albums Wheels of Steel, Strong Arm of the Law and Denim and Leather.
at January 27, 2015 No comments: 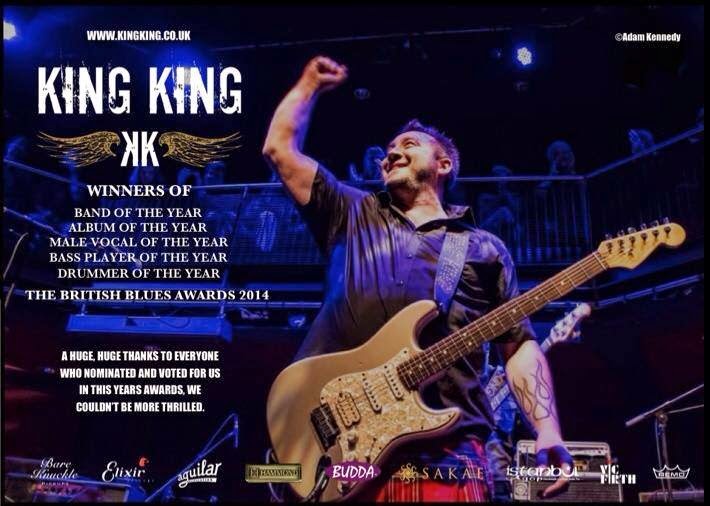 The multi-award winning blues outfit King King return to the UK for an 18-date Feb/March 2015 concert tour. King King play Gateshead Sage on Thursday March 19th. Tickets can be purchased online via www.thegigcartel.com or from the official box office on 0844 478 0898. Support on the tour is from Laurence Jones.

The UK tour follows last year’s release of King King’s critically acclaimed second studio album, "Standing in the Shadows". Get Ready To Rock describes King King as, "one of the most explosive rock/blues bands on the planet." 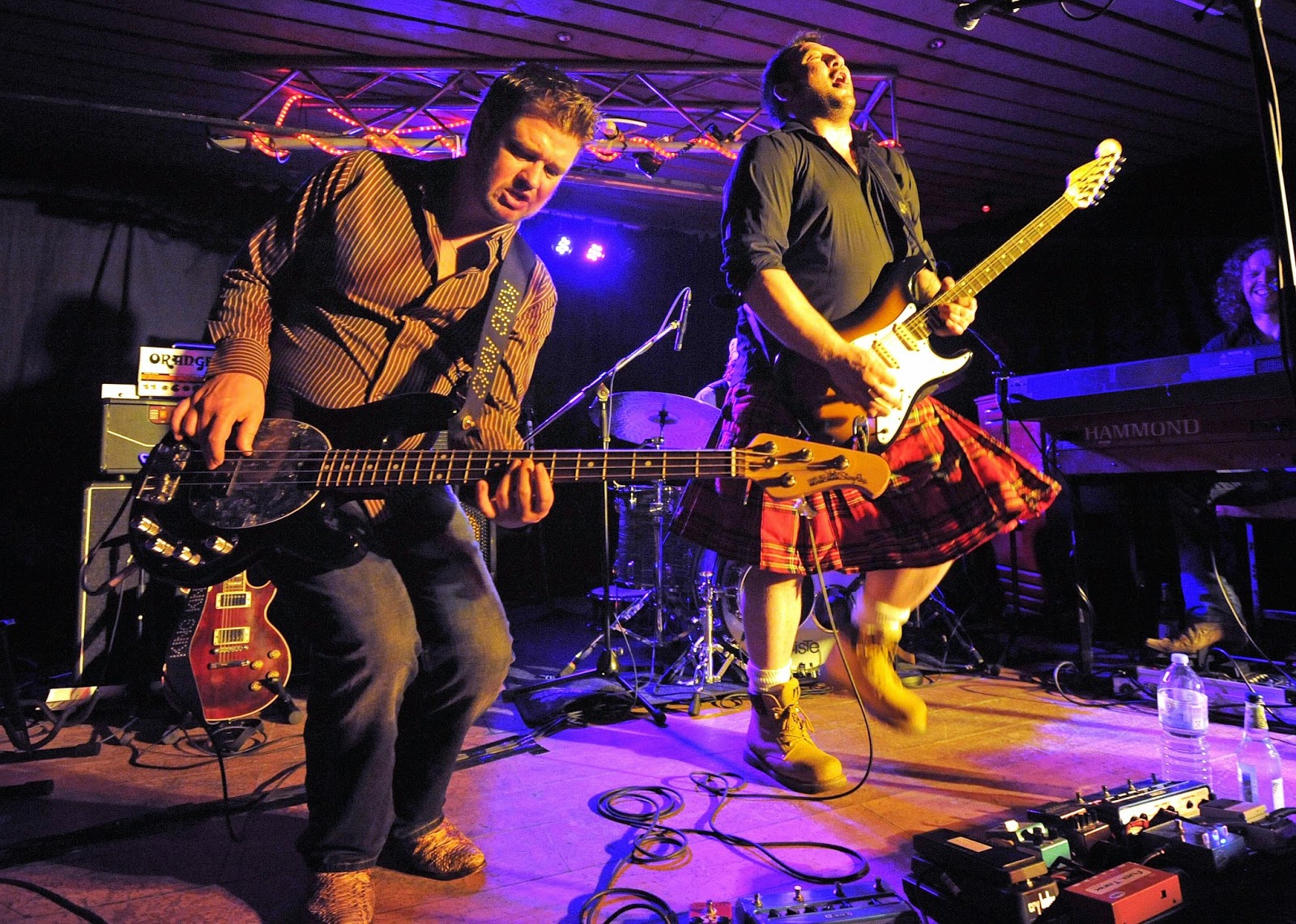 The tour precedes their highly anticipated new album “Reaching For The Light” to be released on May 4th via Manhaton Records. King King will be performing songs from the new album while on tour.

Book in person to avoid booking fees if you can! 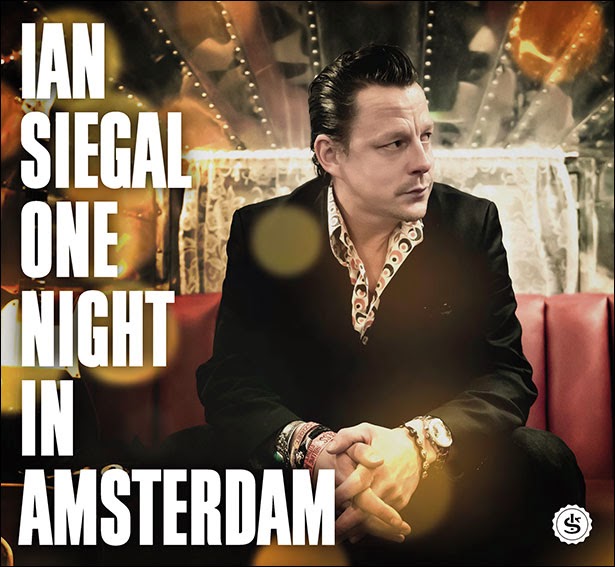 Award-winning British songwriter, Ian Siegal, is set to release “One Night In Amsterdam”, his first full-band live album on CD and vinyl on March 9th.  Released by Nugene Records, the new album dovetails Siegal’s nationwide March UK tour which kicks off at the Chester Live Rooms on March 17th.  Fans can pre-order the limited edition vinyl version of the album here.
While Siegal’s 2014 album Man & Guitar showcased the award-winning British songwriter as a solo acoustic troubadour, One Night In Amsterdam flicks the power switch, markingSiegal’s first live album with a full-throttle electric band. Chalk up another first for the man that Mojo called, “One of the most innovative, gifted and engaging blues performers on the planet today.”
Siegal is able  to draw on an astonishing eight-album catalogue that has scored him seven British Blues Awards in five categories (he’s also the only Brit ever to receive two nominations at the U.S. Blues Music Awards).  The bar for Siegal’s live albums has been set sky-high by Man & Guitar – recently crowned Blues Album of the Year by Mojo– but from the opening notes of One Night In Amsterdam, it’s clear he’s up for the challenge. The new album includes a free bonus track Hard Pressed – unlocked via a download key available on release day, March 9th.