5* Fun At The Theatre Royal

The Play That Goes Wrong
Newcastle Theatre Royal
Until 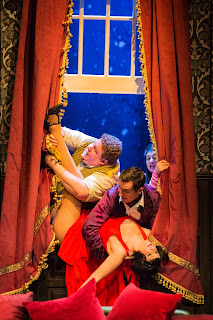 With the precision of a classic Harold Lloyd movie, The Play That Goes Wrong is one of the funniest shows around. This was our second time and that gave us a chance to catch the jokes that we missed first time around when we were laughing too much. 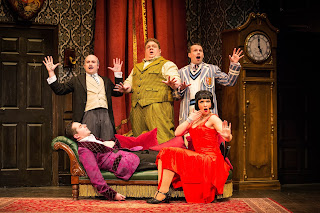 Mischief Theatre have produced a play within a play. The “Cornley Polytechnic Drama Society” attempt to put on a 1920s murder mystery called The Murder At Haversham Manor, but they don’t have a great track record. A lack of funding and volunteers has resulted in scaled down shows. Snow White doesn’t need 7 dwarves. Jason Callender is Jonathan, the straight man, who desperately wants the production to succeed after previous disasters such as James and the Peach when they couldn’t afford a giant peach…which became James, Where Is Your Peach? when the peach became mouldy. 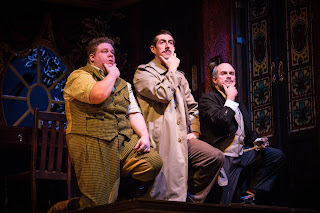 This is a chance to experience schadenfreude – enjoying yourself at the misfortune of others. Props are misplaced, the cast forget their lines, the set malfunctions and the murder victim gets in the way of the action. 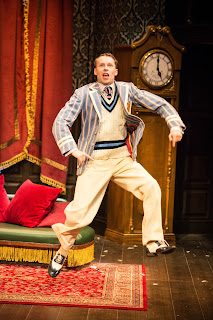 The cast is a fabulous ensemble whose comic timing is first rate. It may appear to be a very loose disaster unfolding in front of the audience but the reality of staging a show like this is far more challenging. The producers get it right and so the theatre is filled with laughter from start to finish. It is easy to see why it won the Olivier Award for the best new comedy in 2015. 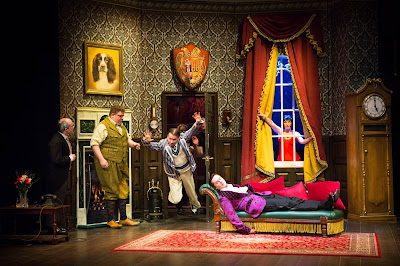 The set, designed by Nigel Hook, acts as an additional character as it literally falls apart in front of your eyes.  How The cast don’t get hurt is down to good direction by Mark Bell. There were a couple of occasions this time when it was hard to believe someone wasn’t at least a bit hurt.

…and if you see the Duran Duran Box set please pass it on to the Sound Engineer Trevor, he has been looking everywhere for it.

I’m still worried about the whereabouts of the dog…

The Play That Goes Wrong appears at Newcastle Theatre Royal from Tuesday 17th  – Saturday 21 st January 2017 including an extra matinee performance on Wednesday 18th January. Tickets are available from £12.50 and can be purchased from the Theatre Royal Box Office on 08448 11 21
21 (calls cost 7ppm plus your phone company’s access charge) or book online at www.theatreroyal.co.uk.