Review: Out of the Shadow at Northern Stage

Nobulus Fill the Stage With All Kinds of Life

This was dance as I had never seen before, from the bursting of life from the primordial soup, the evolution of creatures and then Man, and the evolution of human society to its eventual destruction. Nobulus are a troupe of dancers variously skilled in the disciplines of ballet,breaking,hip hop, Bboying, popping, tutting (?) and gymnastics. Out of the Shadow was created by dancer and choreographer Alex "V-Cell" Wengler, a very clever fella who has not only worked with hip-hop choreographers all over the world, but also managed to fit in studies in Mechanical Engineering and Environmental Technologies, oh and Digital Film. 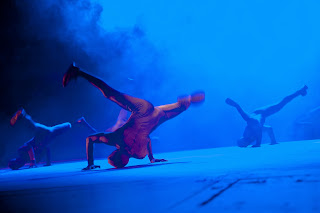 Nobulus come from Austria, the magic of dance is that it can work anywhere. There is no language barrier and these dancers do it so well. The varied skillsets and the inclusion of two women bringing in their own styles, stopped this show having the homogeneity some dance shows have. 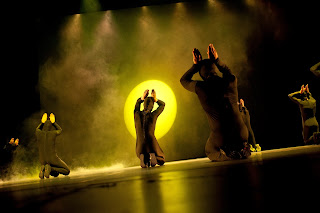 The story was told with intelligence and plenty of humour. The animals were "built" from the dancers and and furniture required in Man's later history was also constructed from the dancers' bodies. The strength of dancers often holding up 3 or 4 other dancers to create a shape was astounding. There were several laugh out loud moments when animals were caricatured or social situations depicted in comedic ways. 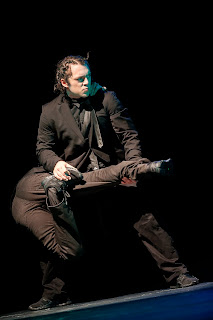 I loved this show as I was constantly being amazed by what was being achieved onstage. Seemingly impossible things were happening. These people are unfeasably fit and flexible and at times almost seem to levitate. I particularly enjoyed the use of music, from well-known classical to familiar dramatic theme tunes, and the way the dancers formed shapes and became the physical form of the music. Yes, I know you'll be thinking "That's what dancing is", but no, these people represent every sound, every beat in ways that at times made people chuckle, in a good way. 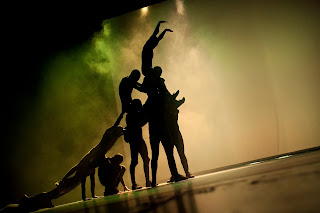 The audience were thoroughly entertained from the magical opening sequence to the apocalyptic end. I wish all dance shows were this fun.

Check out the website for other reviews and a video preview here. And tour dates here.

ONE MORE CHANCE TO SEE OUT OF THE SHADOW ON SATURDAY 9TH NOVEMBER!
Buy tickets HERE and check out the multibuy deals...sort out loads of nights out at once and save money.
at November 08, 2013

Email ThisBlogThis!Share to TwitterShare to FacebookShare to Pinterest
Labels: Dance, Dance City, Evolution, Nobulus, Northern Stage, Out of The Shadow